Ophir, Alaska — In a shocking development, an all-Chihuahua team currently leads the 2008 Iditarod, the world’s most famous dog sled race. More surprising yet, the entire Chihuahua team — dogs and musher alike — are novices, having never competed in a previous dog sled race of any type, let along the mighty Iditarod. The Iditarod is run each March from Anchorage to Nome, Alaska, covering 1,150 miles of some the world’s harshest terrain in 10 to 17 days.

This unlikely team of literal underdogs is led by musher Josephine Eloise von Strattenberg, a New York socialite and dilettante who only took up mushing two weeks ago during a snow storm in Manhattan when she couldn’t get a cab and was late for a brunch date. The resourceful heiress simply lashed her six Chihuahuas — Gigi, Henri, Little Claude, Ricardo, Jean-Paul, and Alphonse — to a wagon and was on her way. The dogs — known simply as “her darlings” — enjoyed the experience so much that Ms. von Strattenberg decided on a whim to enter the Iditarod. The team quickly became a well known fixture on the streets of New York, once doing the grueling Saks-to-Barneys run in a blizzard in just under one hour.

Derided prior to the race as the “Paris Hilton of mushing,” Ms. von Strattenberg and her team have earned the grudging respect of veteran mushers. “Those little guys have a lot of pluck, especially Henri,” said former Iditarod winner Mitch Seavey, who indicated that he is investigating making the switch from Huskies to Chihuahuas for next year’s race. Defending Iditarod champion Lance Mackey, who previously held the lead, said he was passed by the Chihuahua team on Day 4, just outside the checkpoint at Ophir. “All I saw was a flash of mauve and fuchsia, and they were gone.”

At the Ophir checkpoint, while other mushers fed and watered their dogs or took mandatory rest periods, Ms. von Strattenberg paused only to apply lip gloss, check her voicemail, and get each of her dogs a pedicure before again hitting the trail. “Tata for now,” she called back, her words whipped by the howling wind. 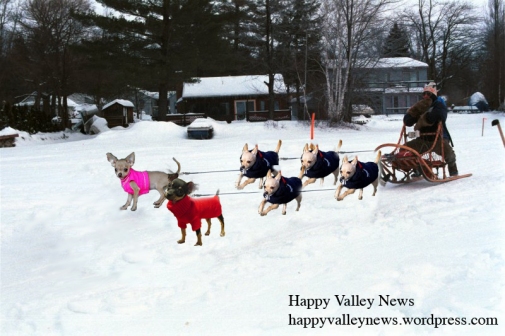 Many thanks to Mat Jacobson for the Photoshops, which certainly were not done during work hours.

This entry was posted in Humor, Original Content. Bookmark the permalink.