Alfonso Cuaron did an AMA

Alfonso Cuaron, director of Gravity (which I will defend to the death) and Children of Men (only the best movie ever), did an AMA (ask me anything) over at Reddit, and it was 51 shades of awesome.

You can read the whole thing here but here are a few favorite responses:

[–]liamquane 664 points 21 hours ago
What are your guilty film pleasures?
[–]AlfonsoCuaron[S] 2094 points 21 hours ago
Last year I loved Sharknado and I can’t wait for the sequel.
[–]Artvandelay1 335 points 20 hours ago
Sharknado 2: The Sharkening directed by Alfonso Cuaron.
I’ll take it for the 17 minute, one-take, opening shot of Los Angeles being obliterated by sharks in 3D.

[–]Rodox_Video 548 points 21 hours ago
Was there ever an event or incident in your childhood that triggered your inspiration to eventually become a (great) filmmaker?
[–]AlfonsoCuaron[S] 2760 points 21 hours ago
I really don’t believe in all of these Freudian things because they are not always penis I mean real.

[–]UsedForWeirdComments 365 points 22 hours ago
Who smells better, Clive Owen or George Clooney?
[–]AlfonsoCuaron[S] 1016 points 21 hours ago
Both smell fantastic. Clive smells like Cinnamon with hints of clove and citrus. George smells like red woods with vanilla and a hint of tequila.

[–]melbduran 176 points 21 hours ago
Have you seen HER? What did you think of it?
[–]AlfonsoCuaron[S] 665 points 20 hours ago
I absolutely love HER. I think it’s the best film about love that speaks directly to an age since ANNIE HALL. It’s a beautiful film that also explores questions about the nature of love and consciousness. But, as I told Spike, I’m torn between HER and BAD GRANDPA.

Okay, alright, this hurts a little. But EZ Pass does rock. I mean, just look at those idiots, paying tolls.

Just a few days ago I saw the actual Coachella lineup had been announced and I clicked on the graphic and after about five bands I was like, whoa, this is really tiring, and then I was, Oh look, Bryan Ferry is on tour. True story. 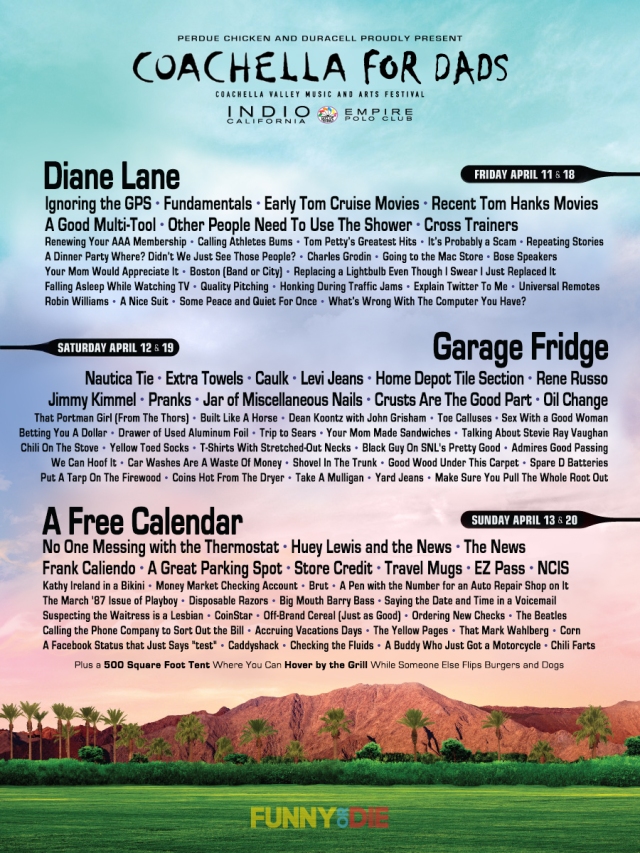 As of tonight I’ll have seen three honest-to-goodness rock and roll concerts in five days, a level of sheer balls-to-wall rockitude that I probably haven’t achieved since ye olde college days.

Herewith a list of the shows that have been rocking my shorthairs:

1. The streak began last Thursday with Ride into the Sun: A Tribute to Lou Reed at the Iron Horse in Northampton, MA. The show featured a mashup of some of the valley’s best bands, but it was tough to say who was who because there was a lot of sitting-in and member swapping. J. Mascis of Dinosaur Jr. played on a bunch of songs, and Mark Mulcahy sang two songs on his own (“Waiting for the Man” and the other I can’t remember) and then played drums on another. Local faves Rusty Belle did righteous versions of “Walk on the Wild Side” and “Sweet Jane,” making those of us who thought we never wanted to hear those songs again think twice. But the best performance of the evening came out of nowhere from a band that as far as I know doesn’t even have a name and wasn’t originally scheduled to play on the bill — local guitarist Greg Kendall fronting a pickup band consisting of his two sons and a friend of theirs, all in in their teens/early twenties, all wearing baseball hats and dressed like lacrosse players. They started off with a fine version of “I’ve Found a Reason,” which was great, fine, perfectly nice and then after a pause to readjust they launched into an absolutely blistering version of “European Son.” Not my favorite Velvets song by a long shot, but this was one of the most electrifying live performances I’ve ever witnessed: a pounding bass/drum backbeat kept things steady while on top of that Greg delivered five minutes of furious guitar-driven madness. It was astounding, one of those transcendent moments that remind you why you go to concerts in the first place.

2. Then on Saturday night Twinkly and I caught Jake Bugg at the House of Blues in Boston. I know he was the hot new thing last year but he just came across my radar a couple of weeks ago and I have been listening to his two albums on repeat ever since. He’s the real deal: a bit of Johnny Cash, some Nick Drake, maybe some Everly Brothers, maybe some Dylan. He performed a short, intense set without any affectation whatsoever; the extent of his stage banter was the name of the song and whether it was on the first album or the second. There was a hilariously huge contingent of young women at the show who screamed in teenybopper fashion every so often, which I didn’t expect. And also: what the fuck is with people carrying on conversations during acoustic numbers?!

3. Finally, tonight me and the kid are seeing Pixies on the launch of their new tour at the Calvin in Northampton. Looking forward to it since it’s been a good 20 years since I last saw them (that time Pere Ubu opened and David Bowie was in the audience). Tonight, Mark Mulcahy is opening the show and if you don’t know him, check out his new album, “Dear Mark J. Mulcahy, I Love You.” It is a fine piece of work.

Redditor spidermanngp made the following “multimedia synopsis” of the first two Iron Man movies for his girlfriend, who was going to see Iron Man 3 but hadn’t seen the first two. Sadly, they broke up before he could finish it — without going into details, spidermanngp, who is obviously a gentleman, says only, “She said the distance was too hard. She changed her mind later but I’d already moved on.” This causes much consternation amongst the Reddit commenters, who seem to believe that the ability to cleverly summarize action films should be a chief criteria in mate selection.

Here is a list of Woody Guthrie’s new year’s resolutions from January 1, 1943. 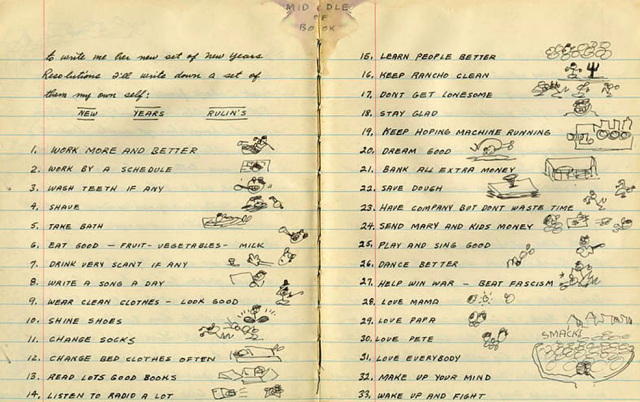 “Possibly the second-worst thing to happen to Japan so far this century . . .

. . . “47 Ronin” is at once both a miserable movie and an extraordinary monument to how miserable the movie industry can be.”

Whoa, reviewers are going to have a hard time topping David Ehrlich at film.com on this one.

Nearly Brechtian in the extent to which its confrontational editing becomes the text, “47 Ronin” is flimflammed together with abrupt transitions, contextually amputated moments, and several different varieties of whiteout. What casual or future viewers might be able to graciously dismiss as catastrophic ineptitude, we are burdened with the clarity to understand as a symptom of a greater problem, the lump identifying a cancer that has already spread too far.

What an ungodly mess this movie is. Jim Vorel tracks the carnage over at the Herald Review (Decatur, IL).

Examination of this film, which releases nation-wide on Christmas Day, must begin with its first-time director Carl Erik Rinsch. Before “47 Ronin,” he was known for directing a largely plotless 4-minute sci-fi short film called “The Gift,” as well as a few TV commercials for BMW and Heineken (I guess he likes robots?). Some of the higher-ups at Universal were apparently very impressed with these, because they saw fit to hand Rinsch a starting budget of $175 million to direct a period piece epic based on one of Japan’s most famous national legends.
I just don’t understand how this could have gone so wrong – I mean, the guy directed commercials for BOTH Heineken and BMW.

Why are terrible movies so much fun to pick over? It’s like a natural disaster in which no one dies (except professionally).